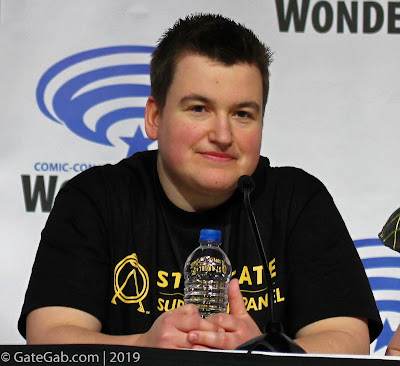 Nicole Saelzle is the Stargate Superfan representing Germany. She is from Bavaria, which is a state located in the SouthEastern area of the country. Nicole is soft-spoken and incredibly intelligent. I really enjoyed talking with her at Wondercon and am very pleased that she granted my request for a longer interview. Read on to see what we talked about.

Gabby: Hi, Nicole. Thank you so much for agreeing to be interviewed. Let's start off simple. Many fans have a nickname or Fandom name that they use online and at conventions. What name do you go by in Stargate Fandom?

Nicole S.: For most of my fandom-related accounts I use the nickname shadow-of-atlantis, which is why people at events also call me Shadow.

Gabby: Do you have a business or job through which you are involved in Fandom?

Nicole S.: Fandom sort of started my freelancing career. Through Stargate-Project.de I got involved in writing articles, doing interviews and creating content for websites. After I did my Masters in Translation and Interpreting in the UK, I started out as a freelancer and this whole Stargate-Project experience somehow led to one job after the other.

Gabby: How did you first discover Stargate?

Nicole S.: My mum watched the show and at some point I joined her in front of the TV. So there you go… my mum is to blame ^^

Gabby: Do you have a favorite Stargate series and/or episode?

Nicole S.: I love Stargate: SG-1 and Atlantis. Favorite episodes… It would probably be easier to name the ones that I don't like. And Stargate: Universe --- I understand what they tried to do with the show and there are some aspects that I enjoyed / would have liked to see more about, but personally I've never really gotten into SGU.

Gabby: Who are your favorite characters and why?

Nicole S.: Carson Beckett, because he is the heart and soul of Atlantis and a character that you can relate to. He is scared in situations most people would be scared in but also does what needs to be done. And Daniel Jackson because he tries to connect to people before jumping to conclusions and hasty reactions, but – especially in the later seasons – he also realizes in which situations he can be the linguist and explorer and in which situations it is time to act.

Gabby:The Superfans are all very active in Stargate Fandom. Besides the Superfans, what other fan groups or clubs do you belong to?

Nicole S.: I have been part of the Stargate-Project.de team since 2005/06 and of course also part of their (well, nowadays our) community. Unfortunately, most Stargate fans in Germany are spread across various small groups, platforms, etc. and not organized in larger fan groups or clubs. Time to change that ;-)

Gabby: What Stargate related activities or hobbies do you enjoy?

Nicole S.: I started going to conventions in 2004 (and it was a Stargate convention with Michael Shanks and Christopher Judge). Years ago I was also very active in the fan fiction and fan art community, but when I became the editor in chief at Stargate-Project.de I decided to focus more on that area. But I still love to cosplay and I create most parts of my costumes myself, be it the Atlantis uniform or the Ori soldier. This also takes away time from writing fan fiction or creating fan art.

Gabby: Do you have a favorite Stargate-related website that you think other fans would enjoy? What is it?

Nicole S.: In my case this one is a bit unfair, isn't it? XD But to be honest, I check out Gateworld on a regular basis (who doesn't?). And right from the beginning, when the Stargate Command platform went online, I registered there. I enjoy lurking around there as much as I can.

Gabby: How did you hear about the Stargate Superfan Project and what made you want to apply?

Nicole S.: I think it was one of the other Stargate-Project.de team members who put up a note on our forums, that she would write an article about the whole Stargate Superfan Project campaign. To find out more about it I headed over to the Stargate Command and the Tongal sites and read the details and I really liked the idea. I'm not quite sure what really made me apply. It probably was a mixture of "This is so cool!", "I've been around for so long and know quite a bit", "I would like to make the voices of German fans heard" and "Let's check out what is actually going on there!"

Gabby: Apart from convention appearances, what does MGM have planned for the Superfan group this year?

Nicole S.: We are considered advisors to Stargate Command. We are sort of a link between the fandom and MGM. Through the Superfan panelists fans can make their voices be heard at MGM and we can also provide input on what the fandom expects from Stargate Command and would like or not like to see, hear, read, …

Gabby: I know MGM plans to join the Stargate fans at both the Gateway anniversary celebration in Chicago in June and at Comic-Con in San Diego in July, this year. I will definitely be attending Comic-Con. Will you be going to any conventions, or participating in any events, live or online, this Spring/Summer as part of the Stargate Superfan Project?

Nicole S.: Does September still count as Summer? I guess so, depending on where you are on the globe. So, yes, I will be at Cal Mah in Telford, UK. As far as I know, that's it for me as far as the Superfan Project goes, however, you still have a chance to bump into me at some other conventions.

Gabby: If the SGC were real, I would want to be the base Librarian so I could examine all of the books and artifacts that the teams brought back. How about you? If you could have a job there, or anywhere in the Stargate universe, what would your job be?

Nicole S.: Considering my handwriting, I guess, I wouldn't be too bad at translating hieroglyphs XD

Gabby: Just one more question, and this is perhaps the most important. Jack O'Neill's favorite color is 'peridot,' what is yours?

Gabby: Thanks again, for taking the time out to to be interviewed for GateGab.com. It was nice to have the chance to talk more.

Posted by GateGabber at 3:04 PM