I had a nice chat with Taylor Underwood during the stroll over to the main convention center building. The entire Stargate Superfan team (I want to call them SGS-1) went over as a group to attend the second Stargate panel of the day. He told me more about his YouTube channel and being TheStargateGuy.

We arrived while the previous panel was still in progress. Since the panel "Stargate Costume Budgeting" was about cosplay, there were lots of fans in uniform to take pictures of. The lighting in the room the panel was held in was not good. I am not very happy with the quality of my pictures taken during it. Look for a photo gallery at the bottom of this post.

Jenny Seelman Stiven was the moderator for this panel and the three panelists were Colleen Kelly Burks, Dean Newbury and Phil Hsueh. Colleen and Phil are both with the SG-Command costuming group. They can be found on Facebook and at SG-Command.org/forums/. I love this group. They have been around Stargate fandom for years and are a wonderful resource for cosplayers.  SG-Command was started by Daniel Kim in the early 2000s and Phil Hsueh has been a member since the beginning. Colleen owns a number of screen-used items, including a jacket RDA wore on SG-1. Note the fake blood stain in the picture. Dean (who was listed in the Wondercon program as prop maker and auctioneer) talked about replica props and showed off some of the items he has made.

Phil and Colleen both talked a bit about creating what I like to call spin-off uniforms. Phil wears a Marines lid with his SGC uniform since his cosplay is an SG-3 Marine. Colleen showed off a patch for the SGC Fire Brigade, which surely must exist even if they were never mentioned on any of the shows. Just think of how many accidents Siler has had!

After the panelists had spoken for a bit, Jenny Seelman Stiven asked various members of the audience to stand and show off their cosplay. A number of the Superfans and other members of the SG-Command costuming group took a turn, as did I. My own cosplay is a work in progress and definitely at the less-expensive, entry level end of the spectrum. I have the green BDU pants with black t-shirt and black boots that is so often seen when SG-1 is on base. I shopped on Amazon.com for everything but the t-shirt, which I bought a 3-pack of at Target. The SG-Command folks recommend finding your local Army/Navy Surplus store, if you want to put together a uniform without spending a fortune.

Once the panel wrapped up, the whole group made their way back down to the Stargate/MGM booth to pose for group photos. The SG-Command folks spent the rest of the weekend posing at the mini-gate with fans and enacting epic battles on the ramp.

This wraps up my report on Wondercon. Sunday, I went back to the booth and got a few more photos of the whole booth and of the give-aways. I said good bye for now to all of my new friends and made sure I had e-mail addresses... the usual stuff I do at the end of any convention.

With Wondercon over, I am not looking ahead to this Summer's conventions. I am not certain yet whether I will make it to Chicago for Gateway, but I will definitely be at Comic-Con in San Diego. I am working on improvements to my cosplay and plan to talk about that in my next few posts. 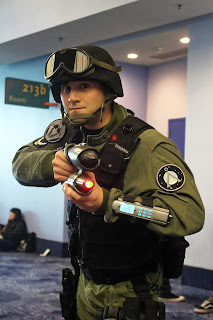 Posted by GateGabber at 8:57 AM