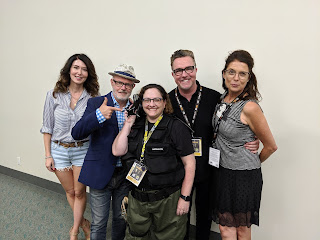 The autograph line in the Sails Pavilion finished a little while ago. The panel was right before the autograph session. Stargate: Atlantis cast members Torri Higginson, Paul McGillion and Jewel Staite, Gary Jones from Stargate: SG-1 and Producer Joe Mallozzi and Ivy Isenberg Associate Casting Producer for SG-1 and Atlantis, all took the stage to entertain the fans.

The room was absolutely packed! YouTuber Yael Tygiel moderated the panel. Each of the actors talked briefly about how they were cast. We got a special treat in the form of a hilarious video from David Hewlett. We also saw a short sizzle reel from David Read featuring memorable clips, set to music, from Stargate: Atlantis. The panelists also treated the audience to a table-read of the first scene from Stargate: Extinction, the Stargate: Atlantis movie that was written but never made.

Not all of the actors are here so their cast-mates filled in, to the great amusement of the audience. Paul McGillion filled in for Shepard and Torri Higginson and Ivy Isenberg read Tayla in unison because both wanted to play her. Gary Jones stepped up and did an awesome imitation of McKay! Jenny Seelman-Stiven, of Stargate Command, read the stage directions.

Joe Mallozzi also wrote a special scene just for Comic-Con that was not part of the original script. It included the resurrection of Elizabeth Weir, giving Torri Higginson a chance to reprise her much-loved role. I got to read the part of Woolsey onstage with the cast! Best four lines I have ever been given!!!

I'm at the nightclub, Fluxx, right now waiting for the table-read of a longer portion of the script. I'm really excited to see the performance.

More later.
Posted by GateGabber at 2:42 AM No comments:

It is Thursday and I'm LIVE at Comic-Con!!!

Well, here I am sitting in a prep room with the professional press waiting for things to start happening. It should be an exciting day. This is my first time in the back room at a big convention. I have worked on many small cons doing everything from Art Show Coordinator to Photographer. (I've even run Archery contests at numerous Robin Of Sherwood conventions!) But this is a new level and I can't stop grinning.

This is going to be a very full day. The Stargate: Atlantis panel is this morning and the actors have gone through the script for the reading tonight. I had fun watching them greet each other when they arrived. They are all obviously good friends. Lots of big smiles and hugs. I promise to take LOTS of pictures!

Stay tuned here on GateGab.com all weekend Stargate news as it happens at Comic-Con.