An Interview with Taylor Underwood, The Stargate Guy 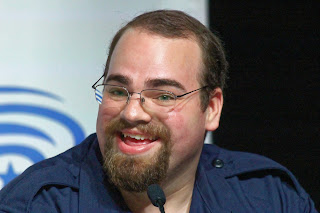 This week I interview Stargate Superfan Taylor Underwood, better known as The Stargate Guy. Taylor is from Coos Bay, Oregon in the NorthWestern United States. He has a talent for video production and an encyclopedic knowledge of Stargate.

Gabby: Hi, Taylor. Thanks for making the time answer my questions. So let's get right down to it. Can you give me the rundown on The Stargate Guy? It must be pretty much a full time job to put your show together every week.

Taylor: It is not a full time job, although I would absolutely love it to be, but I have a YouTube channel The Stargate Guy where I make weekly videos about Stargate. Everything from theories, how things work, character profiles, interviews and more. You can go to it here: https://www.youtube.com/thestargateguy

Gabby: I have been asking all of the Superfans how they first discovered Stargate. What's your "origin story?"

Taylor: Well like a lot of people I discovered Stargate sitting on the couch next to my dad. He worked a lot and when he wasn’t working his full-time job he would be out in the woodshop making cabinets for someone or rebuilding the house for the twelfth time. I was never a big fan of working with my hands, I can do it but it is not my most favorite thing to do. So unlike my brothers who bonded with my dad through working on cars or houses, I bonded with him by watching sci-fi and movies.

Although he was a rather manly man, he loved sci-fi and enjoyed watching any show or movie with “star” in the name. You know the ones I’m talking about. One day he saw that Stargate SG-1 was on and turned it to that channel. I don’t remember the exact episode, but I remember asking what this was because it was so cool. You had guys running around shooting aliens, talking about history and science, it was awesome! Well it turned out that he had the DVD of the original movie and we watched that and whenever Stargate was on we would watch it and talk about it together. We would form theories and discuss battle tactics, archeology, physics, whatever the episode was about.

Gabby: Do you have a favorite Stargate series or episode?

Taylor:  My favorite Stargate series would be SG-1 primarily it’s because that is what my dad and I watched together most. It has a good dynamic between characters, it built the universe, and introduced the basis of everything that we all love.

My favorite episode would be “Wormhole X-tream”. In that episode we not only get a good story about Martin, but also a peak behind the curtain of how Stargate was made. We see the set builders, costume makers, prop people, directors, camera crew, producers, writers, everybody! It is filled with inside jokes and I would re-watch the DVD commentary of that episode a lot. That kind of thing actually helped inspire me to make my own videos.

Gabby: I love that episode too. Who is your favorite character in the franchise and why?

Taylor: Personally, I have to go with Doctor Daniel Jackson. He made history, archeology, and anthropology look cool. Of course he was shooting a gun some of the time, so that helps. I always loved history but that character made me love it more. Later on when thinking about what to study in college I thought about how it would be kind of cool to be like Daniel Jackson. So I went to Utah State University where I earned to Bachelor of Science Degrees in History and Anthropology and a Museum Studies Certificate.

Gabby: That's awesome. I'm constantly impressed by what an incredibly smart group of people Stargate fans are. The Superfans are all very active in Stargate Fandom. Besides the Superfans, what other fan groups or clubs do you belong to?

Taylor: Well currently I'm mainly in the Stargate Fandom, I don’t have too much time for anything else. But I have been active in the Star Trek and Star Wars fandoms a little. Mainly, outside of Stargate I’ve been involved with board game clubs and groups. I love board games and have even designed a few myself. When I have a little free time, I need to blow the dust off of one and sell it to a publisher.

Gabby: What Stargate related activities or hobbies do you enjoy?

Taylor: I grew up in a small town away from everything so pretty much anything fan related was off of the table. The first time I attended a convention was last year in 2018 when I went to Gatecon The Evasion. I had a chance to interview some of the cast and crew members. For the first time in my life, I was talking to professional actors who I had watched and who were good enough to play roles that impacted my life. That was an amazing experience. Since joining the panel Stargate Command has been generous and helped me get down to Wondercon in 2019. That was my first big convention experience. It amazed me to watch thousands of people dressed up. Booths with absolutely everything, it was incredible.

I only have gotten into cosplay because one of my viewers on YouTube thought I needed a uniform so they sent me one, I have never really had the money or reason to get into it otherwise. I always like talking to people at conventions seeing cosplayers, prop building, and reading fan articles and theories. It amazes me how creative and talented the fandom has become.

Gabby: Well, we had really good role models, didn't we? Stargate is full to the brim with creative and talented characters. How did you hear about the Stargate Superfan Project and what made you want to apply?

Taylor: I heard about it by getting the mass email from Stargatecommand.co and on the same day I had several subscribers send me messages telling me about it and telling me that I should throw my hat in the ring. I ended up making a short video about it for my viewers and asked them what they thought. I had dozens of messages and people from all over the world saying that I should apply. What really pushed me over the edge however, was the support of my fiancé Sarah. She encouraged me to follow my dream and I’m really thankful that she has.

Gabby: Do you have a favorite Stargate-related website that you think other fans would enjoy? What is it?

Taylor: Well, it sounds bad to say it but my YouTube page is my favorite. I’m also working on a website: www.stargateguy.com but it’s still in development. That being said I do really like Gateworld.net Darren, Adam and everyone over there is really professional and they put out some good articles and keep up with Stargate news. Also Stargatecommand.co is really cool now with the upgrade. Honestly, I love that I can watch any episode or movie of Stargate on my phone or computer anywhere I am for $20 a YEAR. Any Stargate fan who isn’t doing that is just missing a great opportunity in my opinion. That is a steal. I’m not paid to advertise for them by the way, I just really like it. Lol

Gabby: Apart from convention appearances, what does MGM have planned for the Superfan group this year?

Taylor: Well, a lot of things are still up in the air and as the line goes, “we are working on it”. With the release of the new Stargatecommand.co website one of the things that we are going to be doing in helping with monitoring and supporting the different factions on the site. That way, fans have someone to go to with simple questions about things and if they have ideas about what the franchise could do to be better, they can come to us and we can relay that message straight to MGM. That is the main reason why we are here, we are the mouthpiece of the fans, not MGM puppets. There are also other possibilities and opportunities that are being talked about. I can’t really say much more, but I’m excited about the future of Stargate.

Gabby: I know MGM plans to join the Stargate fans at a number of conventions this year. I will definitely be attending Comic-Con in San Diego. Will you be going to any conventions, or participating in any events in the next few months as part of the Stargate Superfan Project?

Taylor: I hope too, nothing is confirmed for sure yet. The difficulty with me is that I’m planning a wedding, running a YouTube Channel and working a full-time job. So, in short I’m a wonderful mixture of broke and busy. I would love to attend those events if financing comes through. As far as online, I do drop into the Wormhole Wednesday’s on occasion on the Stargate Command YouTube page, and chat with folks while we rewatch an episode or two. Personally, there is a possibility of a small live gathering with The Stargate Guy clan in Portland, Oregon sometime, but that is in the early stages of development.

Gabby: You definitely have to keep me posted on that, it sounds really fun. Will MGM allow you to share anything about their plans for the fans?

Taylor: One of the things that they are planning is to have more fan involvement and blur the line between studio and fandom. This is clearly evident by the creation of the Superfan Panel which has never been done before and is really experimental. On the Stargatecommand.co website they have a section in there where they are going to feature different fans who have had Stargate really impact their life. I’m really looking forward to that. With my YouTube channel I have had the opportunity to talk to thousands of fans from around the world and I love hearing their stories of how Stargate has affected them. It really is something that brings all of us together.

Gabby: If the SGC were real, I would want to be the base Librarian so I could examine all of the books and artifacts that the teams brought back. How about you? What would your job be?

Taylor: I would want to be an anthropologist on an SG team. I would love to be on the front lines of exploration and meeting different cultures from around the universe. The only issue is that I would have to drop some weight because if the Goa’uld or Ori are chasing me, I want to get the hell out of there!

Gabby: Lol! Just one more question, and this is perhaps the most important. Jack O’Neill’s favorite color is ‘peridot,’ what is yours?

Taylor:  Green, no question. Hunter or forest green tend to be my favorite, although, I do like a good puce.

That wraps up my interview with Taylor Underwood. Over the next few weeks I will be getting ready for Comic-Con. I am working on my SG-1 cosplay and will be sharing photos of the work I am doing to modify a Blackhawk Medic vest to make it look more like those used on the show. Many people buy two vests and combine them to make a replica, but this Librarian is on a budget! I am using one purchased vest and materials anyone can find at their local fabric store. I also plan to make a foray into 3D printing to see if I can produce a low-cost GDO. 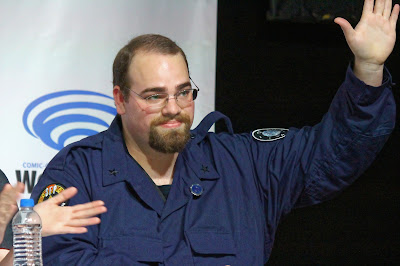 Posted by GateGabber at 1:19 PM