What Happened at Wondercon? -- Part 3 (Saturday)

Saturday is usually the busiest day of any convention. It is the day the most people attend and the day the major panels of the event are held. That meant that all of the things I was most looking forward to were scheduled to happen on Saturday at Wondercon. I was eagerly anticipating the two Stargate panels. I wanted to get the best possible seats for both, which is why I got up extra early despite having stayed up rather late playing D&D.

My nefarious plan for the day was this:
1. Get up extra early to be at the front of the line when the doors opened.
2. Grab portable caffeine on my way to said line and eat granola bars while waiting to get in.
3. Photograph everything.

While it may not be a stupid enough plan to catch a replicator, my plan did prove to be effective. Yes, this did mean I arrived in the room the Stargate Superfan Panel would take place in two whole panels ahead of time. But I got a seat in the center of the front row and this is very important if you want to get pics without the backs of people's heads in them. Photographers are not allowed to leave their seats to take pictures during panels at either Wondercon or Comic-Con. You need to be a member of the Press or hired to cover the panel if you want to be able to walk around in the aisles with your camera.

I used the first two panels to figure out the best camera settings given the lighting and my distance from the stage. Both panels were really interesting. The first was about Dungeons & Dragons, which I have been playing since I was eleven. (FYI: I'm currently a Tabaxi Sorcerer named Fluffy Shadow.) The second panel was about the animated feature Missing Link. The speakers had brought models of the main characters to show off and talked about the production process.

At last it was time for the Stargate Superfan Panel! The Superfans were meant to be sitting in alphabetical order by first name, but they were a chair short as the Superfans began to file on stage. An additional chair was fetched and everyone was seated with Taylor Underwood on the far end instead of between Sommer Roy and William Murphy. And then it was time for... SELFIES!!!

The panel then began and Jenny Seelman Stiven (MGM) introduced Kieran Dickson (Stargate Command) and Stephen Iwanyk (Tongal) and the Superfans. The pros took a few minutes to explain how the contest had been run on Tongal and the winners announced on Stargate Command. The Superfans duties are intended to include attending conventions, and possibly other fan events, and talking to MGM about the fandom and the future of the Stargate franchise. As I understand it, they will basically be a focus group that does outreach in the fandom to help celebrate the anniversary year.

Each person who entered the contest on Tongal had to send in a short video of themselves explaining what makes her or him a Stargate Superfan. The same montage of clips from the winners' videos that was released on Stargate Command was played for the audience. You can watch it here. The video says there were 9 fans chosen, but as I mentioned previously, there are actually 10 Superfans. Sommer Roy was named a Superfan just before Wondercon.

Then the Superfans were finally introduced to the audience and did a bit of Q&A with the moderator. I asked most of them some follow-up questions later in the day. What I'm sharing here is a combination of what they said on the panel and what they told me. 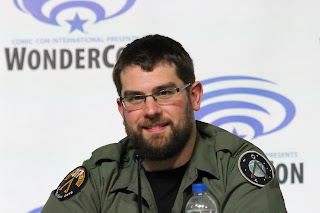 Bra Zat is from France. He leads Les Stargate Troopers, a costume group started in 2006. He showed me the Costume Reference Library they maintain online. It has both French and English versions. If you want to put together screen-accurate cosplay, this is definitely a brilliant resource. Les Stargate Troopers have also appeared in the Stargate SG-17 fan films which can be found on YouTube. Here is their Facebook page. Bra Zat told me that he would love to see more interaction between the fan groups in different areas on the world in the future. Think of it as a United Nations of Stargate fandom. I believe Daniel Jackson would very much approve. 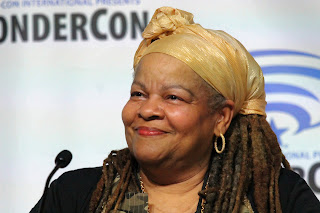 Marcia Middleton, from the United States, is the fan who first suggested, and was later asked to run, the Stargate track at DragonCon. DragonCon is held annually in Atlanta, Georgia. The convention's Press page states that they have over 35 different fan-based tracks and over 3500 hours of panels, workshops, gaming and more! I have been to track-based conventions in past. They generally have multiple panels a day for each track/area of interest. This basically makes it 35+ conventions happening simultaneously in the same venue. Pierre Bernard, who acted in two Stargate SG-1 episodes, has been a guest at DragonCon in past. He was in the audience and was introduced at this point. Marcia showed off a program he designed a few years ago for the Stargate track. See more about Pierre at the bottom of this post. 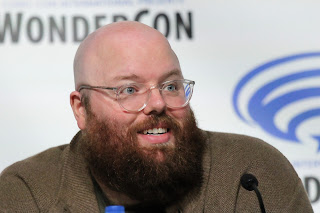 Noah Miller, also from the United States, told a highly amusing story about sneaking downstairs after his parents had gone to sleep so he could secretly watch Stargate. The series helped inspire him to become a professional videographer. 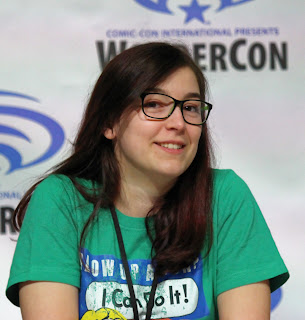 Nicole Rodriguez Galdo is from England. She has been a Stargate fan since she was five, having been introduced to SG-1 by her father. I did not get to speak to Nicole for very long during Wondercon and will give you more details about her at a future date. 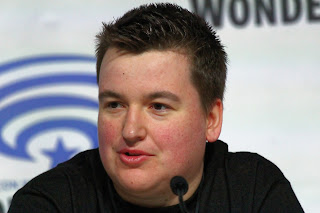 Nicole Saelzle, from Germany, is an editor on Stargate-Project.de. Fans frequenting the site know her as Shadow-of-Atlantis. I had a wonderful chat with Nicole about conventions, Bavaria and the various flavors of Stargate. Nicole feels it is important to respect everyone's choice of a favorite series and make everyone feel welcome in the fandom. I really like this about Nicole. 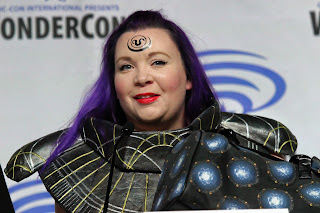 Sonia Melinkoff was up next. Sonia is from the United States and she runs a fannish business called Nerdy Novelty Design. Sonia was wearing her Jaffa cosplay at Wondercon and had the coolest bag made with Stargate-print-fabric. You can see the staff weapon she made in the winners' video clips on Stargate Command. 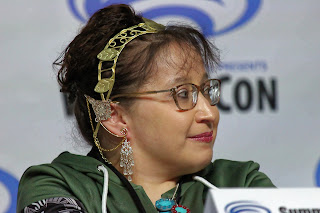 Sommer Roy (AKA: The 10th Superfan) is also from the United States. She may be the only person ever to have a doctor literally write her a prescription for a daily dose of Stargate. While in the hospital recovering from surgery, Sommer's medical team noticed that her vitals improved when she was watching her favorite series. The rest is history. Sommer likes good Mexican food as much as I do. 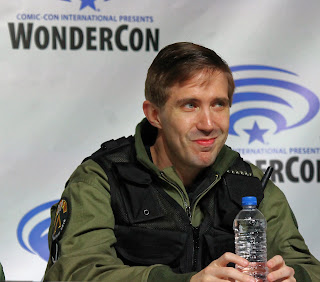 William Murphy, another fan from the United States, is a nuclear engineer who is attending Grad school in pursuit of an additional
degree in aerospace engineering. He was sporting his green off-world cosplay all weekend, complete with zat'nik'tel. 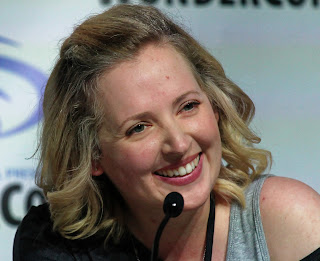 Yvonne Cahill, of Australia, wrote a poem for her video submission. You can hear part of it on the video on Stargate Command. Besides writing, Yvonne likes to crochet. You can catch a glimpse of her Jack in the video. I have been knitting SG-1, myself, and really enjoyed chatting with her about yarn crafts. 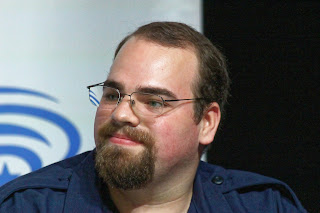 Taylor Underwood, United States, may be more familiar to you as "The Stargate Guy". He has a YouTube channel on  which he posts videos that feature everything from interviews with Stargate cast members to analysis of the various series. As of this writing The Stargate Guy has 6,936 subscribers.

With the introductions to the Superfans finished, the panel wrapped up. I followed the group out to the lobby to see if I could get better closeups of some of them. Everyone was grinning and seemed really happy with how the panel went. I got my pictures and was going to head off to the Stargate cosplay panel on my own, but Jenny invited me to walk over with the group. This resulted in my getting even more great pictures. Thank you Jenny!

As you can see, all of the Superfans are incredibly talented people who have been making a huge contribution to Stargate fandom. I am very glad I got the chance to meet the whole group on their debut outing as Superfans. I will leave you for now with the write-up I promised on Pierre Bernard. 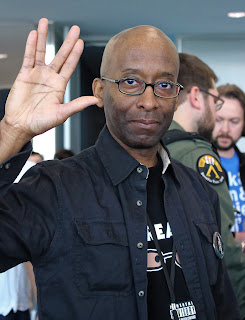 I had noticed during the Missing Link panel that Pierre Bernard had also scored a front row seat. He kindly let me swap into the seat next to him to get a better camera angle at one point. Pierre was a graphic artist for The Conan O'Brien Show. He did a sketch on the show called Recliner of Rage and after raging about Stargate SG-1 he was invited to be a zombie in the 200th episode. Click here for a YouTube link to the Conan footage. Pierre later did a cameo as Sargent O'Brien in the SG-1 episode Zero Hour. Here is the YouTube link to the Conan piece on Pierre's second SG-1 appearance. As you can see from the photograph, Pierre has a great sense of humor. 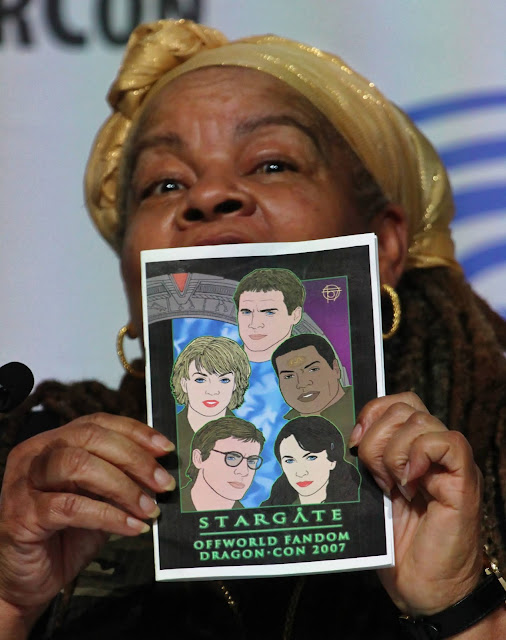 Marcia Middleton shows off a DragonCon program that Pierre Bernard did the cover art for. 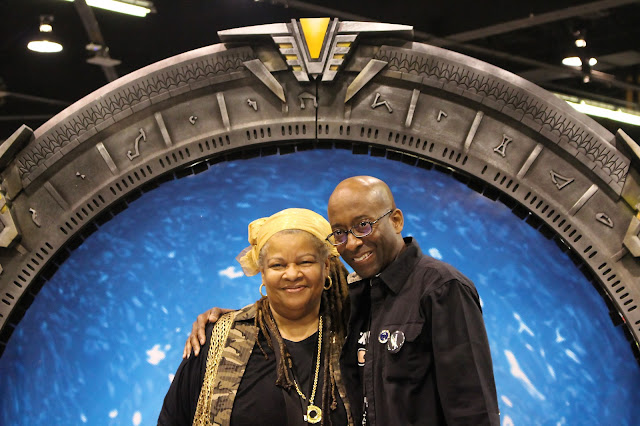 I will give you the scoop on the cosplay panel in my next post, and introduce you to the SG-Command cosplay group. I have been running onto one of them at conventions since the year 2000!

Posted by GateGabber at 8:14 PM