The enthusiasm with which fans of the Stargate franchise welcomed last year's Stargate: Origins appears to have given MGM big ideas. Leading up to Wondercon, 2019 there was a wave of excitement building in Stargate fandom and rumors flying that something new might just be in the works. MGM held a contest on Tongal, to select 10 Stargate Superfans and rumors began to circulate that there might be 'news' soon. This has me very hopeful and very excited.

I have been a fan since 1994, when Stargate the motion picture was first released in theaters. Right around the time it came out, I saw an article on the film in a magazine -- a big double-page spread of photographs -- and that was what did it for me. The Ancient Egyptian influence on the costumes and sets intrigued me. I made a point of going to see the film as soon as I could. Then I made a point of going to see it again.

I LOVE all things Ancient Egyptian and have since the first time I saw the collection at the Boston Museum of Fine Arts. I was about age three. That's about how old I was when my parents began taking my brother and I to museums. It was the jewelry that caught my attention at that young age. The mythology and the romance and wonder of discovery captured me once I could read for myself. Stargate has all of that plus alien spaceships. It really is my perfect movie.

Stargate: SG-1 turned out to be my perfect television series when it arrived on the scene. Honestly, all they had to say was Richard Dean Anderson was in. I was even ready to forgive them for messing with my favorite film. I'd watch RDA read the phone book. I know. That's very, very shallow of me. The thing is, I didn't find anything about SG-1 that I needed to forgive. Obviously they changed a few things. But the changes made sense to me. For the entire 10 year run, I never missed an episode. I hung in for all of the spinoffs and am still hoping there's more to this story.

I haven't been a particularly loud fan in the past. My 'thing' in fandom has always been photography. Really, it's my thing outside of fandom as well. It occured to me right before Wondercon that I could do something with that. I could bring all of the fans who wanted to be there but couldn't, along to the Con, if I captured it to share. I might just also help make some noise-- get the word out that I want more Stargate and so do a lot of other people from all over the world. So here goes...

Over the coming months, I will be sharing my photos from Wondercon, 2019 and those I took on visit to the SG-1 sets in 2001. I'll be delving into the history of the franchise and talking to people about where it might be going. I hope you will come along and explore this incredible universe with me. 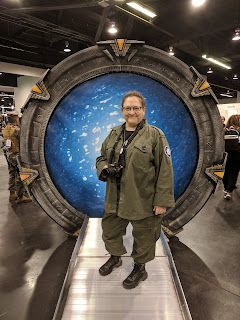